"Stronger than Death" Monument is dedicated to Semipalatinsk's atomic legacy which named as Monument to the Victims of Nuclear Testing. It consists mainly of a tall slab in which the silhouette of a mushroom cloud is cut out. Inside the mushroom cap is a metal object that looks a bit like a cross between a spark of light and an atom symbol.

At the base of the cloud, i.e. at "ground zero" as it were, there's supposed to be a sculpture of a woman shielding her child from the nuclear inferno (right at the epicentre of the blast?!? Good luck!) – but when I visited the site it, too, was undergoing substantial refurbishment and the sculpture was boarded up.

The black marble plating of the concrete monument had been peeled off, presumably to be replaced with a new layer. The grounds around the monument were being dug up and lots of heavy construction vehicles were vrooming noisily about. I could, however, make out that the black marble slab next to the main monument still features only an unfinished map of Kazakhstan.

Allegedly (according to the Bradt guide, again) it was intended to show all the sites of elevated radiation within Kazakhstan. As it (still) is, the only location on it that is marked in writing is that of the former capital Almaty.

Otherwise the only features shown are lakes, some not entirely realistic (including a way too large depiction of the Aral Sea). The location of the memorial ensemble is a bit out of the centre to the east, in a green, wooded area on a river island, just off a road that bends off to the right opposite the Abai monument on Abai Street, ca. two-thirds of a mile onwards on the left. 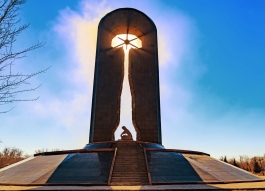 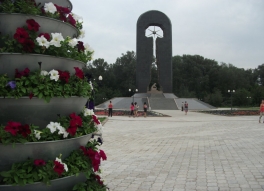 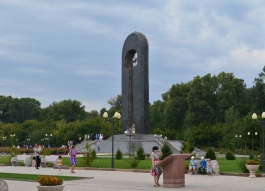 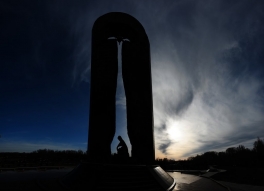 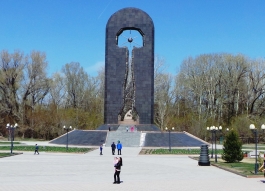 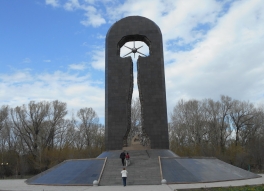 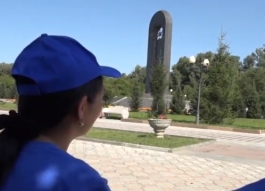