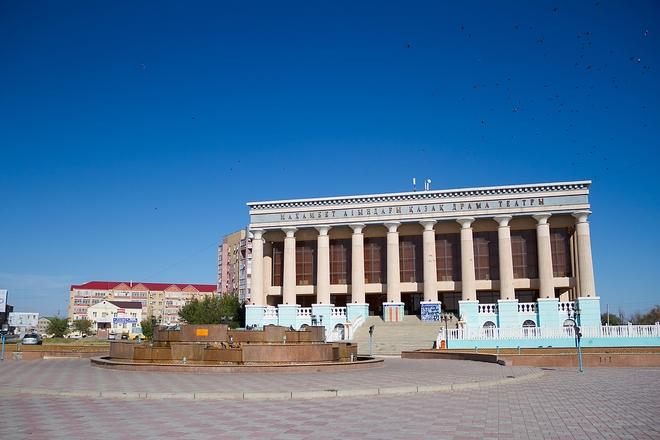 One of the leading places in the cultural life of Atyrau and the whole Atyrau region belongs to the Kazakh Drama Theater named after Makhambet Utemisov. The theatre of Atyrau is one of the oldest Kazakh theaters in the country, it was opened on March 5, 1938, on the basis of the club "Oilman" by the decision of the People's Commissariat.

A group of talented Kazakh youngsters, who finished 1-year drama school, was the originator of the theater. Among the founders and first theater actors were: Kuat Tulekov, Shashty Zhumabekova, Aitzhan Yessenbayev, Onay Zhaksybayeva and many others. After a while Guryev theater (formerly Atyrau) was merged with at that time disbanded Kyzylzhar theater (Petropavl).

The renovated theater worked on staging M.Auezov’s "Tungі saryn". In future, the repertoire was filled with a variety of performances based on classic and contemporary materials. The staff and the repertoire grew, expanding its line of roles, and its importance in the cultural life of the region raised along with that. The theater changed its name to Guryev Musical Drama Theatre.

In 1956-1957, in the first national festival "Theatre Spring" which was held in Almaty, the chief director of the theater – T.Duysembaev – received the award of the Ministry of Culture of the Kazakh SSR for production of the play "Botagoz" by S.Mukanov. Within the framework of the festival in the capital, “Shuga" by B.Mailin, "Asil Zhandar" by B.Korқytov, "Issatay – Makhambet" by Akynzhanov, "Zulimdyk pen Mahabbat" by Schiller were presented.

All of these performances were recognized by the audience and praised by the theatrical environment. Participation in the festival was the team’s creative victory and it was marked with high awards: K.Tolekov and Z.Suleymenova received the title of "People's Artist", A.Akhmetova, Zh.Manapova, K.Imangalieva, I.Imankulova - the title of Honored Artist of the Republic, many artists were awarded diplomas and certificates. In 1975, the theater finally moved to its own building in the center of Atyrau.

The building had not only a lovely view but was also perfectly adapted to the needs of the theater. Today the theater’s stuff is still working in this building. The theater has creative achievements and awards received in the recent history of independent Kazakhstan. The Republican contest of theaters of Kazakhstan, dedicated to the 100th anniversary of S.Seyfulin, took place in Zhezkazgan in 1994. The team of the Atyrau theater became the winner of this contest.

The performance "Zharaly Zholbarys" by K.Myrzaliev, presented by the theater, won the first prize and it was sent to the World Theatre Festival in Egypt. The production of the Atyrau theater also was noticed at the festival and was warmly received by the foreign audience. The Honored Artist of the Republic T.Kuanyshev and the director Sh.Karibaev received the award named after Makhambet for the main role in this play.

IX Festival of Kazakhstan Theatres was dedicated to the 10th anniversary of Independence of the Republic and held in two cities – Almaty and Petropavlovsk. The Atyrau theater presented its new performance R.Otarbaev’s "Beybarys" directed by Ch.Zulhasha. This performance earned high praise and became a real discovery for all lovers of theater.

The staging of S.Nazarbekuly’s play "Makhambettin bіr kunі" dedicated to the 200th anniversary of Mahambet Utemisov, which was celebrated in the framework of the UNESCO, was equally good and successful. In 2006, the theater was overhauled.

Currently, there are 165 employees including 64 creative professionals working in the theater. The Regional Drama Theatre named after Makhambet Utemisov is situated in Atyrau, Abay str.8. In the theatrical season, the doors of the theater are always open for residents and visitors wishing to touch the real art of the theater. 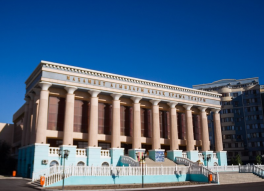 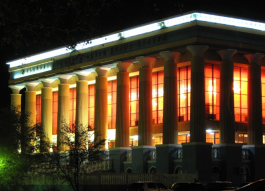 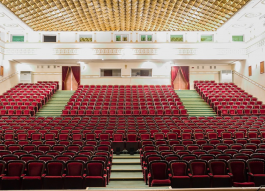 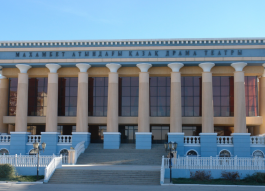 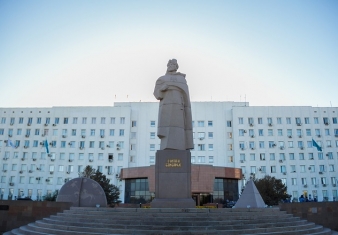