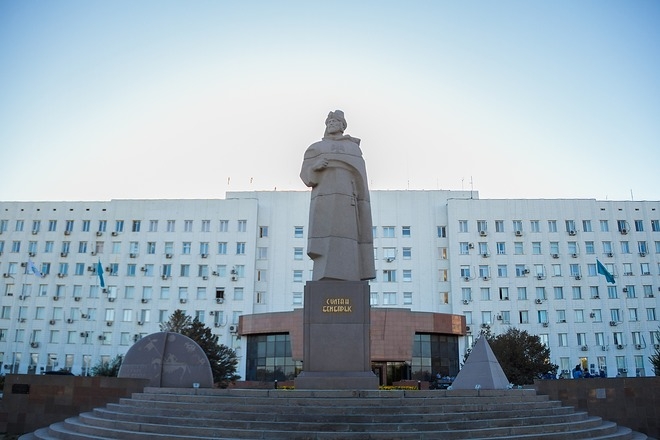 It is worth to say that this is the only monument in the world set for the great Kipchak who was the ruler of Egypt. The monument is made in the form of Sultan Beibarys's figure standing in full length on a high pedestal with a sword on his belt, and the shoulders covered with a heavy cloak, looking proudly and straightly into the distance, he pierces the surrounding area and looks through eternity.

The monument was built of granite specially brought from Kurtin district of the Almaty region. Its height is 7.2 m, width – 3.8 m, the figure is set on a massive pedestal. The pedestal consists of 3 blocks. The lower block has the size of 2.8 m.x2.4 m., the height of 60 cm. The middle block is 2,4x1,8 m., the height is 1.6 m. The top block is 2,4x1,8 m., the height is 1.4 m. The area of the surrounding territory for stacking plates is 8120 square meters. The weight of the monument is 120 tons. The total height of the monument along with the pedestal is 11.8 m. The creator and sculptor of Sultan Beibarys monument is K.Kakimov, the architect of the whole ensemble is K.Zhumabay.

Stone figures in the shape of pyramids and yurts are constructed next to the main figure of the monument. It means that the Sultan is a historical figure of two countries - Egypt and Kazakhstan. Behind the monument, the designers put granite hemisphere decorated with a runic inscription in the ancient language. In Turkic this inscription reads as: "Elime, zherime, suyma. Osi bir Turk eli el bolsyn depzhasagan isimiz edi. Kultegin”. The translation of the text is: "My people, my land, and water. Aiming that the Turkic population becomes a nation, we have done our job. Kultegin". The monument was unveiled in 2000, the opening was attended by the President of the Republic of Kazakhstan Nursultan Nazarbayev, he uttered following words in his speech: "... We and our descendants should remember the names of Baybarys, Abylay – Khan, Abulhair, Al - Farabi and other personalities. The world should know Kazakhs, their roots and how brave we were and will be".

Beybarys was born in the steppes of the Deshti Kipchak, in Kazakhstan it is assumed that he was descended from Bersh clan, who lived in the steppes of the Caspian Sea region. In the period of Mongols invasion, a ten-year boy was sold for 800 dirhams and ended up in Egypt as a slave of the merchant Bundukdari, who became his teacher, mentor, and patron. Bundukdari sent the slave boy to learn the art of war and he became a brave warrior of Sultan Salih, the ruler of Egypt, and later on, he ascended to the throne and ruled the country for 17 years.

He spoke only in his native language Kipchak and introduced many elements of the traditions of the Kipchaks: he drank kumis and ate horse meat. He laid the foundation for friendly relations between Egypt and Golden Orda. Although a few emirs had already ruled the Egyptian government before Beibarys, it is Beibarys whom the Arab world considers as the founder of the state Egypt.

On February 1, 2000, by order of the former Akim of the region I.Tasmagambetov, the central square of Atyrau where his monument stands were named after Sultan Beibarys. 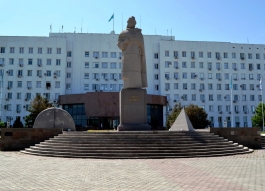 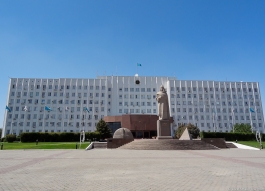 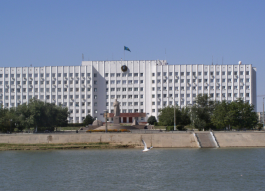 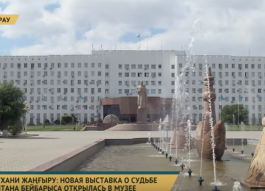