Yrgyzbay Ata mausoleum is located in 63 km to the northwest from the regional center of Aksuat.

Yrgyzbay, son of Dockhan, who lived between 1787 - 1850, was the famous doctor, synykshy (bone-setter). He treated herbs, the diagnosis put on the pulse, did not take money. I cured Kunanbaya when that seriously got sick.

Kongangbai presented to the doctor a mare with a foal with words: "If Allah with this mare allows you will not know need" and his words came true. Somebody Shinybay in 1924 wandered near a grave of Yrgyzbaya, once dreamed it that the doctor asks to construct to it a monument, and for it, he will give birth to children.

Shynybay constructed a stone fencing and at it was born three sons instead of three dead. The monument was repeatedly rebuilt, in 1990 the mausoleum was built of a silicate brick (the original fencing remained inside).

Yrgyzbay Ata mausoleum is located in a southwest part of the complex consisting of funeral constructions and economic constructions. The kitchen and location for a ritual dream functioning in the 90th of the XX century are to the northeast from the mausoleum. Due to the sharply increased number of pilgrims, the complex extends to this day (2005).

The mausoleum is executed from a silicate brick. The casing of the mausoleum square in the plan with a semi-circular overhang on the principal facade (the sizes in respect of 6,20 x 5,55 m, the height of 8,0 m), is superimposed by a hemispherical calotte in which base a row of glass blocks is fixed and holes for cooling are arranged.

The original calotte from a silicate brick on a cylindrical sub dome drum is so far covered with the sheet metal colored in blue color, over a calotte the metal gilded spike topped with a half moon is set. The transition from a camera base square to a circle of a calotte was realized by means of the sails removed by a laying blousing. At camera center, in a stone fencing, the rectangular gravestone revetted with gray marble was set.

On the principal facade, on a sub dome drum, the text of "YRGYZBAY" is removed by red color, an input part and angles of the mausoleum are decorated by a red brick. On both sides from an input in arch niches, marble tables with texts are inserted.

The mausoleum is of great importance as widely known and esteemed in the people monument. 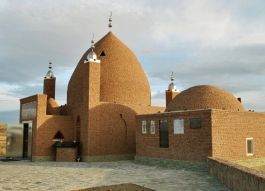 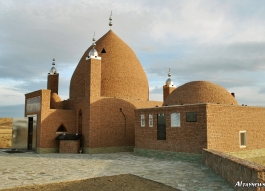 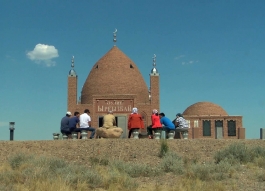 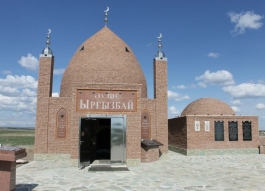 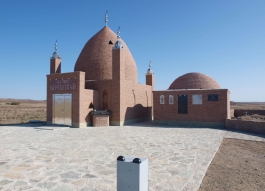 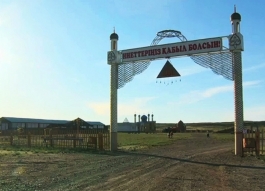 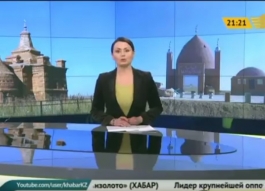 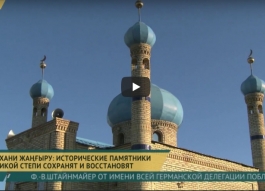