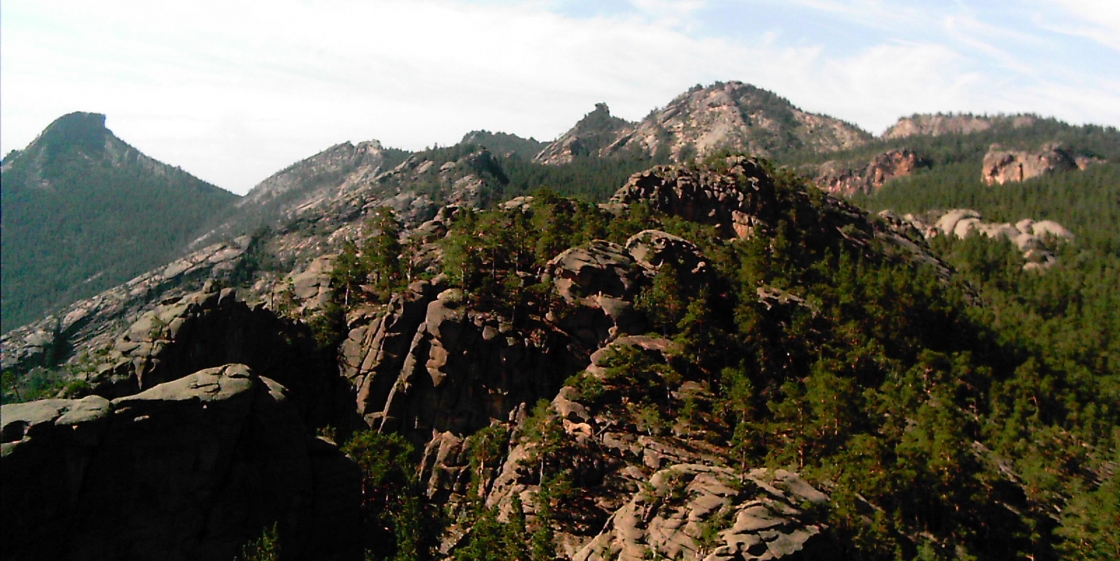 Karkaraly National Park is a protected reserve and national park in the Karaganda Oblast (Karaganda Region) of Kazakhstan. The park headquarters are in the city of Karkaraly, 244 km east of Karaganda.

On March 1, 1884, the Karkaraly Forest was established. In 1889, construction began on many of the parks cordons: Bedaik, Koktube, Ayushat, Tulkebai, Tonkurus, and others. From 1910 to 1913, the House of the Forest Warden, the parks most famous building was constructed. It is known for its interesting architecture.

Having undergone several administrative changes in 1947, the Karkaraly Forestry Department was organized. In the beginning of the 1990s, work began on the creation of the national park. On December 1, 1998, resolution number 1212 was passed, transforming the area into the Karkaraly National Park. The primary goal of the national park is the protection and restoration of the natural area within the park boundaries.

Near the park are two other protected areas:

In the Paleozoic Age (250-300 million years ago), this area of Kazakhstan was an inland sea. The water retreated 1.2 to 2 million years ago when the ancient Paleozoic shield was cracked by granite. The area lifted and created the Kent and Karkaraly Mountains. The rocks and cliffs have been here ever since and for many thousands of years, the untamable steppe wind and precipitation has sculpted the rocks into unique shapes.

People have lived in the Karkaraly area since ancient times. The earliest archeological finds connected with ancient people dates back to the Paleolithic (or Stone) Age. Archeological sites from the Bronze Age have been investigated more often. There are over 30 archaeological sites (from the Stone Age, Bronze Age, and Iron Age) of burial mounds and ancient settlements within the park boundaries. Some of these are the best-discovered sites from these periods in Kazakhstan.

Karkaraly National Park built the Nature museum in 1983. The two-story wooden building consists of exhibition halls of flora and fauna found in the Karkaraly National Nature Park. In one of the halls of the museum is a 3D map of the national park. The building is known for its beautiful wooden interior. Adjacent to the nature museum is a large wildlife preserve that houses bison, red deer, fallow deer, yak, wild boar, and argali.

Lake Baceen is located at 1200m above sea level and 4.5 km (2.8 mi) north-west of the city Karkaraly. You reach the lake on the Eco-Trail “The Stone’s Tale.” Literally translated from Russian, the lake's name is Lake Basin, due to the geological formations surrounding the lake. The lake is small- only .14ha. The lake is only accessible by foot and generally takes 4 hours round-trip. This trail takes you through pine forests, unique rock formations, and beautiful vistas from the lake.

Lake Shaitankol is one of the most popular areas in the park. The lake is located at 1200m above sea level and is 5 km (3.1 mi) west of the city Karkaraly. You reach the lake on the eco-trail “The Legend of Lake Shaitankok.” The lake is accessible by foot and generally takes 5 hours round-trip. The lake is oval in shape and surrounded by rock cliffs up to 10m high. The depth of the lake is unknown. The water level does not decrease throughout the year because it is fed underground water and precipitation. The translation from the Kazakh and Russian name is "Devil's Lake".

Argali is the largest species of sheep in the world. The argali in the national park is one of six subspecies of argali living in Kazakhstan. In the Karkaraly National Nature Park, the highest numbers of argali are in the Kent Mountains and in the neighboring Beldeutas Natural Reserve.

The Pallas's cat is the size of a domestic cat, but it is different from an ordinary cat it that it has a dense body with short thick legs and very thick hair. Its eyes are yellow and unlike the domestic cat, its pupils remain round when looking at bright light. This species is very rare. The population continues to decline and they are on the verge of extinction. The exact number of this species is unknown because of its secretive behavior and wide distribution.

The park has over 700 species of plants and is home to 80% of all flora found in central Kazakhstan. Five plant species are listed in Kazakhstan’s Red Book of protected species:

However, in total, there are 28 rare or disappearing kinds of flora in the park.

Forest in the Kent Mountains

The forests within the park are made up of pine, birch, poplar, willow, and juniper trees. 71.3% of the wooded area in the park are pine trees. Birch forest occupies 10% of the wooded area and aspen forest takes up 2%. The underbrush of the park includes Cossack’s juniper, Tatar’s honeysuckle, and other plants. Shrubs occupy 34% of the total area of the park. There are 87 kinds of medicinal, oil bearing and alkaloid plants in the Karkaraly Mountains.

Because of drought and high winds, 2,525 hectares of the Karkaraly forest were burned by forest fires in 1997-1998. After the fire, the park worked very hard on planting new trees and restoring the forest to its original state. A nursery in the Kent mountains provided the saplings for the revegetation project. Fire prevention standards were implemented and the following year 164 hectares were destroyed from 18 separate fires. In 2003, only 84 hectares were burned. 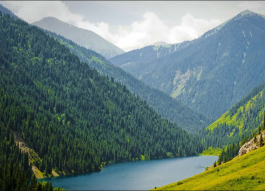 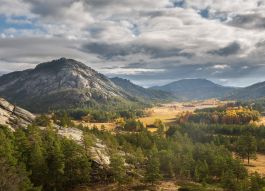 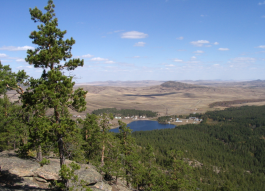 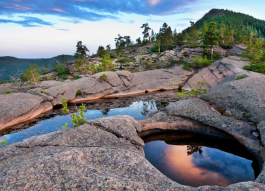 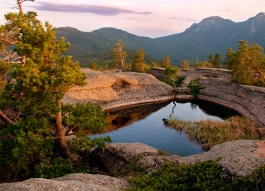 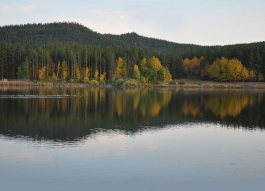 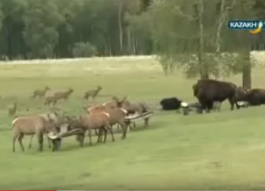