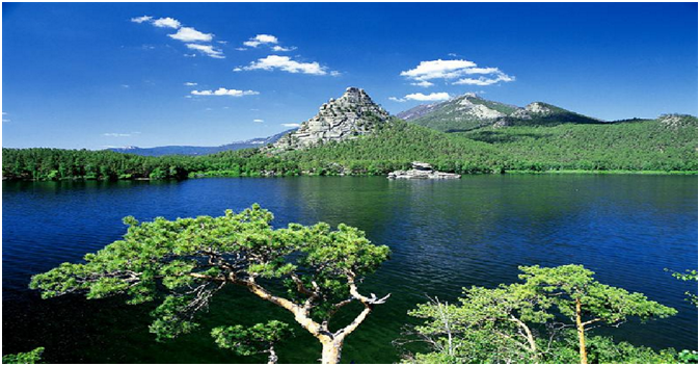 Kokshetau National Park features the unique landscape, archaeological sites, and recreational opportunities of the Kazakh Uplands of Northern Kazakhstan. Located in the transition zone between the Siberian taiga (to the north) and the southern steppes, the terrain is an "island" of forests, lakes, and mountains surrounded by steppe. Kokshetau is located in Zerendi District, Akmola Region and Aiyrtau District,North Kazakhstan Region. The park boundary is 45 kilometres (28 mi) west of the city of Kokshetau itself, and 275 kilometres (171 mi) northwest of the capital city of Astana.

Kokshetau is located in the forest-steppe and steppe region of the Kokshetau Uplands of Northern Kazakhstan. The terrain is one of low mountains and hills, undulating alluvial plains with a complex networks of streams, and a number of significant lakes in lacustrine depressions. There are five main sectors in the park:

The park is in the Kazakh upland ecoregion (WWF #0811), a relatively small area in northern Kazakhstan characterized by temperate grasslands, savannas, and shrublands. The Kazakh uplands occur in two patches, one centered on Kokshetau National Park to the northwest of Astana, and another to the southeast of Astana. This ecoregion has been relatively isolated from development, and has been a haven for rare species.

The climate in the Kokshetau region is "Humid continental climate, cool summer subtype" (Koeppen Classification Dfb. This climate is characterized by large swings in temperature, both diurnially and seasonally, with mild summers and cold winters. Precipitation averages 13 mm per year (maximum in summer). Average temperature ranges from −16.1 °C (3.0 °F) in January to 19.7 °C (67.5 °F) in July.[5]

The area is characterized by meadow steppe, and predominantly pine (Pinus Sylvestris) forests with birch and aspen. Common shrubs are juniper, rose hips, hawthorne, and willow. Much of the steppe area has been affected by past plowing and grazing. Scientists have recorded 597 species of vascular plants, 36 of which are relic boreal species reflecting forest island nature of the area. The park is well known for fish in its various lakes, commonly pike, roach, and carp. 363 species of vertebrates are known in the park: 224 birds, 51 mammals, 5 reptiles, 1 amphibian, and 19 species of fish. Almost half of the mammal species are rodents, with representatives from the steppes, desert and forest, such as the southern birch mouse, the steppe lemming, and the Jungar hamster. The presence of large numbers of rodents attracts predators, including fox, wolf, badger, stoats and weasels. Larger mammals include wild boar, elk, and a significant population of Siberian Roe Deer.

Kokshetau Park is developed, with 14 hiking trails (over 200 km), four bus excursion routes, and two water-routes (totaling 18 km). Many of the hiking trails run along sensitive wetlands next to wet pine and birch stands, and traffic is regulated by group and size. Tourist hotels are available nearby, and the park supports campsites and tourist support facilities. The more developed tourist routes and us routes visit archaeological sites, such as Kurgan burial mounds, recreational complexes, forests, waterfalls, and caves. 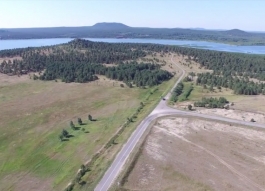