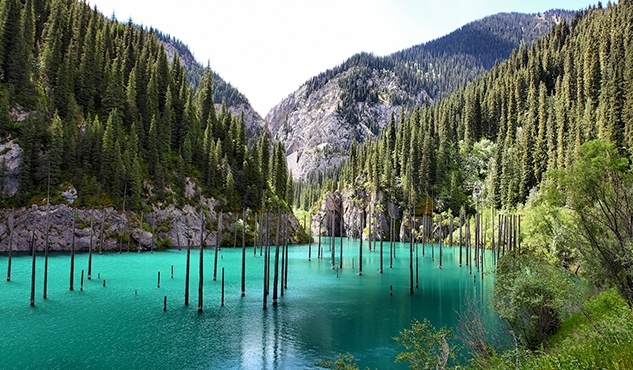 Kolsay Lakes National Park is centered on the Kolsay Lakes, a system of mountain lakes on the north slope of the Tian Shan Mountains of southeast Kazakhstan, 10 km from the border with Kyrgyzstan. The scenic Lake Kaindy is also in the park. Nature conservation is an important part of the park's mission, with 72% of the territory under strict protection, and only 13% set aside for tourism and recreation. Kolsay Lakes is located in Raiymbek District and Talgar District of Almaty Region. The park boundary is 120 kilometers (75 mi) southeast of the regional city of Almaty, although the road mileage is much longer.

The lakes of the park are strung along the Kolsay River, which flows south-to-north out of the Tian Shan. Two ranges of the Tian Shan contribute the Küngöy Ala-Too Range and the Trans-Ili Alatau. The northeast corner of Lake Issyk-Kul is 30 kilometers (19 mi) to the south on the south side of the Tian Shen. The major lakes are:

Lower Kolsay Lake. A natural mountain reservoir created by landslides that blocked the Kolsay River, the lower lake is about 1 km long, 400 meters wide, and 80 meters in depth. It is accessible by road and has guesthouses and campsites. (altitude: 1,818 meters).

Middle Kolsay Lake (Mynzholky). Five kilometers upstream from the lower lake, the middle lake is the largest of the three and reaches a depth of 50 meters. (altitude: 2,252 meters).

Upper Kolsay Lake. Six kilometers above the middle lake, the upper lake is surrounded by spruce trees and alpine meadows. It is 6 km from the Sara-Buluk pass and Kyrgyzstan. (altitude: 2,850 meters).

Kaindy Lake. Located 11 km west of the Kolsay Lakes, Kaindy Lake is on the Chilik River. The lake is known for its mirror-smooth reflection and stands of dead spruce trunks rising from the water. It was created in 1911 when an earthquake caused a landslide that blocked one end of the gorge.

The park is in the Tian Shan montane steppe and meadows ecoregion (WWF #1019), which covers the middle and upper altitudes of the Tian Shan mountains of Central Asia. The area catches enough rain to support meadows and forests, and because of its isolation is home to many rare plant and animal species.

The climate in the Kolsay Lakes region is "Humid continental climate, cool summer subtype" (Koeppen Classification Dfb). This climate is characterized by large swings in temperature, both diurnally and seasonally, with mild summers and cold winters. In July, temperatures can range from 30 °C (86 °F) during the day, to −5 °C (23 °F) at night.

Scientists have recorded 704 species of plants in the park, 12 of which are classified as rare. For animals, the park has recorded 50 species of mammals, 197 species of birds, 2 reptile, 2 amphibia (green toad and süyirtumsıq frog, and 2 species of fish (rainbow trout and Tibetan bare kökbas). Six mammals found in the park are classified as rare in Kazakhstan: the Tian Shen brown bear (U. a. isabelline), Central Asian river kamşatı, Turkestan lynx, Snow leopard, Tien Shan argali, and the stone marten.

There are guesthouses in the nearby village of Saty, and campsites. There is a 25 km hiking route that begins at the lower lake, progresses by the other Kolsay lakes, over the Sary-Bulak pass (3,278 km), and down to Lake Issyk-Kul. The route takes three days by foot or one day by horse. 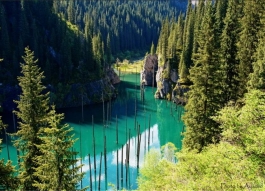 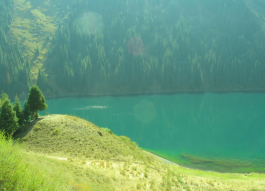 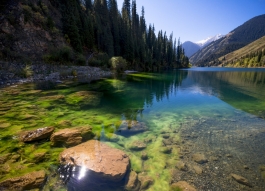 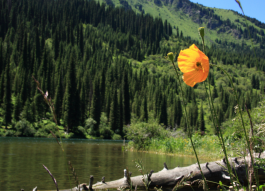 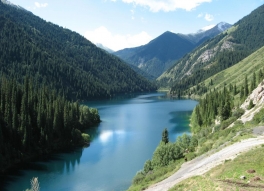 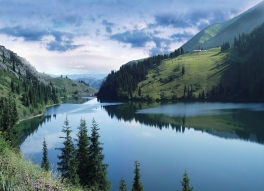 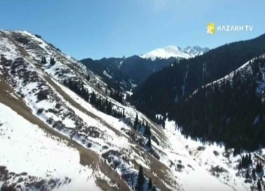 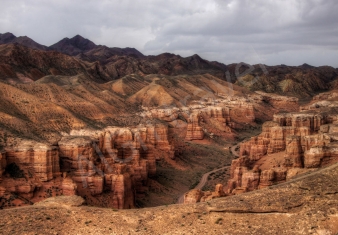