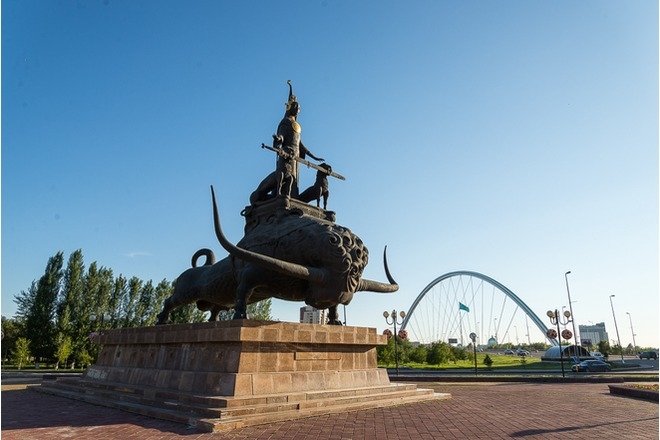 Zher Ana monument is one of the most interesting monuments in Astana, which was opened in 2008.

The monument presents a queen of Saks – Tomiris, who is standing on a giant bull. Hulk bull is on a huge pedestal. Tomiris is standing with outstretched arms and guarded by two leopards with swords.

Tomiris was a great queen of Saks. In 530-529 BC the king of the Medes - Cyrus conquered many countries and received the title "Lord of Asia". Then he went camping to the Great Steppe when widow Tomiris was a Saks' Queen. Tomiris' husband was Prince of Tigrahaud –Rustam, who was killed by Cyrus in battle. Cyrus sent an ambassador to the queen with the proposal in order to marry her and to join two nations into one state. The queen of Saks refused.

Women and girls of Saks also participated in the decisive battle, who followed the queen in the battle until the last decisive moment. The Bloody battle ended with the victory of Saks, the Persians did not expect to see brave women on the battlefield. Tomiris cut the head of Cyrus and filled the leather bag with his blood and blood of two traitors. Then she exclaimed: "You wanted blood, so drink it to the dregs!", - and dropped his head into the bag. Tomiris had a flexible strategy and great prestige among the population. Due to her courage, scattered tribes of Saks united under her management and formed one of the first states on the territory of Kazakhstan.

The author of this monument was the famous Russian sculptor, painter, and jeweler Dashi Namdakov. Traditional images of sculptor's works - nomadic warriors and horsemen, sacred figures, magic woman and generic patrons of Buryat: totem animals and mythological creatures. Views can see deformed, curved, elongated figures with disproportionate body parts, for example, elongated necks and elongated limbs. Almost all of them have Asian features.

The sculptural composition of Zher-Ana almost is accurately decorated. Despite large sizes of the pedestal, the bull, the throne on which stands a woman, the whole composition gives a wonderful feeling of holistic harmony. Swipe horns of ten-metered bull reach seven meters. This is a very large monument, but it is located in such a way that massive of bull is parallel to the ground, steppes, flatness, and only a woman with her clear and relief Mongoloid face dominates the space.

The author of the monument is undoubtedly managed to escape from the circle of the old Soviet monumental school and find a formula of expressing the nomadic mentality. This formula can be expressed as: the form should not be ashamed of space. Feeling of freedom and spaciousness does not leave you in Astana, as soon as it is the matrix of this city. Namdakov managed to catch it.

Each detail of this giant sculptural group amazes with elaboration. The blanket is on the back of the bull, which fixed with harnesses and constrictions. Despite the imagination of the composition, examination of sculpture in detail amazes with accuracy and realism of performance. There is no feeling of deceiving visibility.

The sculpture is established on the pedestal, and it is stylized under ancient monuments of the East.