Mausoleum Syrlytam is a unique architectural monument of VII-VIII century, which is located in Karmakshy region (Kyzylorda) from 16 km north-east of the village Tagay.

The exact date of the mausoleum is unknown; however, scientists have argued that architectural features are evident. This is a typical single-chamber portal-domed mausoleum with tent covering. Inner dome is spheroconical; external has the shape of octagonal pyramid, which set on a low octagonal drum. The portal is not too voluminous, visually and structurally it has walls of the main facade with the lancet arched entrance.

This mausoleum is one of "that particular groups of Central Asian mausoleums, which are characterized by the presence of elevated on the drum of the dome, evidence of North Turkistan architectural construction.

Syrlytam was built of fired bricks. It had dimensions of 10 × 11 m in architectural terms, and saved the height up to 9 m. Transition from the quadrangle to octagon made by using angular arches. Then, using diagonally projecting bricks consoles in the corners of the octagon implemented immediately transition to the circle of the dome. Dome of the mausoleum was a double with hexadecimal drum. Unfortunately, it wasn't preserved.

The mausoleum has two entrances - to the south from the north side. Central entrance (south side) was designed by portal with lancet arch. Peshtak of main facade decorated with U-shaped belt from majolica tiles. The windows of the drum, which lined by false arch, were lancet shape. According to the study of construction materials and architectural techniques, scientists refer the mausoleum Syrlytam to the monuments of the Golden period.

Syrlytam is a unique as mausoleums of the Golden period. There are very few paddy domes and drums, where at least the remains of these structures have been preserved sufficiently to judge their original form and how they are particularly valuable. There is another mausoleum belonging to this period in Kazakhstan, which is situated 25 km to the south of the village Inkardarya, on the banks of the dry riverbed channels with the same name.

According to the architectural features of these mausoleums they are very similar, both are single-chamber and portal-dome structures, and the difference between them is only construction of the dome ceilings. Mausoleum, which is located on the river Inkardarya blocked with single spheroconical dome on a low round drum.

Historical and cultural significance of the two survivors of the Golden mausoleums of Eastern Aral region is enhanced by the fact that due to the high degree of safety give a complete picture of the two main types of mausoleums of this period.

In spite of location at a considerable distance from each other, both have the same name – Syrlytam. Kazakh archaeologist M.K. Sembin analyzed meanings of architectural landmarks and said: "The interior with decorative painting, carved terracotta in facing facades should be associated, in particular, Syrlytam (syrly - painted).

There are few mausoleums with such name in Kazakhstan and they are located in different parts of the country (Akmola, Kostanay, Kyzylorda)". Nick-names usually appear for mausoleums, which lost their own names, etc. when history has not preserved the names of buried people.

Time and human activity does not spare the ancient monuments. Unfortunately, it relates to Syrlytam mausoleum. The mausoleum was partially destroyed in the mid-20th century. According to the native elders, the roof of the mausoleum was accidentally demolished by rope. However, the walls were preserved. The historical and cultural monument was reconstructed in the 2000s. After restoration Syrlytam regained own original appearance. 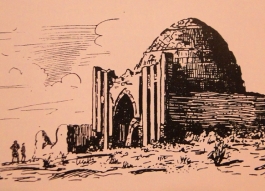 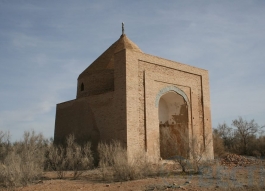 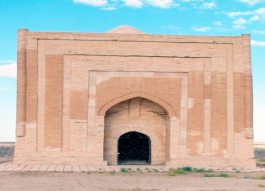